You are here: Home / boating / Cruise the canals over Christmas 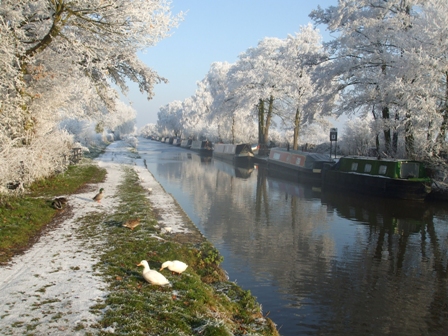 Britain’s canals can offer a great antidote to the hustle and bustle of Christmas.  A number of Drifters’ (www.drifters.co.uk) canal boat hire bases offer winter cruising giving people the chance to crank-up the on-board heating, light the stove, stop-off at cosy country pubs with roaring log fires and wake up to frosty towpaths and crisp clean air.

Today’s canals boats are fully equipped with all the essential mod cons, including central heating, hot water, TV, DVD players, showers and flushing toilets, so whatever the weather, it’s always nice and cosy on board.

As its low season, not only are the canals even more peaceful than usual, but boat hire prices are cheaper than in the summer.

Whether it’s a cosy boat for two or jolly boat for six, celebrating Christmas or New Year afloat offers a great getaway.  And it’s free to moor almost anywhere on the network, so a canal boat could provide the perfect place to lay your head after enjoying new year celebrations in waterside towns and villages like Bath, Chester, Devizes, Bradford on Avon, Stratford upon Avon, Braunston, Banbury and Ellesmere.