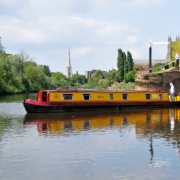 Some are seriously challenging with steep flights of locks and long dark tunnels to negotiate. While others, like the Droitwich Ring, are easier and more suitable for narrowboat holiday beginners.

Here are our Top 9 cruising rings:

1. The Droitwich Ring (21 miles, 33 locks, 16 hours): Starting from the Drifters’ narrowboat hire bases at Worcester or Stoke Prior, this cruising ring is the only one in Europe which can be completed on a short break. It re-opened five years ago following the £13million restoration of the Droitwich Canals, which reconnected the River Severn and the Worcester & Birmingham Canal at Worcester. Highlights include: the historic Spa town of Droitwich; the Hanbury flight of locks; and the beautiful City of Worcester with its stunning cathedral.

2. The Outer Pennine Ring (192 miles, 248 locks, 130 hours): not for the faint-hearted nor inexperienced, this epic three-week journey can be undertaken from Drifters’ bases at Sowerby Bridge or Barnoldswick. It crosses the Pennines twice and includes the passage of Britain’s longest canal tunnel. It takes in the Calder & Hebble Navigation, the Huddersfield Narrow, Ashton, Rochdale, Bridgewater, Leeds & Liverpool canals; and the Aire & Calder Navigation with electric locks. Highlights include: dramatic Pennine views; Tuel Lane Deep Lock; Manchester City Centre; and the awesome three and a quarter-mile long Standedge Tunnel which cuts through the Pennies to link Marsden and Diggle; Bingley Five Rise locks; Skipton with its medieval castle; Leeds City Centre and waterside Royal Armouries Museum.

4. The Cheshire Ring (97 miles, 92 locks, 55 hours): starting from the Drifters’ base at Anderton, Acton Bridge, Autherley or Peak District, this superb route takes narrowboat holiday-makers through the heart of Manchester and the Peak District via the Ashton, Macclesfield, Peak Forest, Rochdale, Trent & Mersey and Bridgewater canals. Highlights include: the spectacular vertical Anderton Boat Lift, also known as ‘The Cathedral of the Canals’; Preston Brook Tunnel; Dunham Massey Hall and its working Elizabethan Mill alongside the Bridgewater Canal; Castlefield Basin; Manchester’s China Town; the Rochdale 9 locks; Buxworth Basin, Whaley Bridge and the glorious Top Lock at Marple on the Peak Forest Canal; the Cheshire Plain; and heavily locked ‘Heartbreak Hill’.

5. The Warwickshire Ring (101 miles, 94 locks, 48 hours): starting from Drifters’ bases at Stoke Golding, Stoke Prior, Napton, Coventry, Warwick, Stockton, Stretton, Braunston or Rugby, with a mixture of urban and rural landscapes, the Warwickshire Ring is easily navigated in two weeks. It takes in the Grand Union, Oxford, Coventry and Birmingham & Fazeley canals. Highlights include: the flight of 11 locks into Atherstone, Hawkesbury Junction, one of the tightest turns on the system where the Oxford joins the Coventry; Hillmorton locks (three pairs); the Knowle Flight of five locks; the pretty canal village of Braunston; Napton Junction; Newbold and Shrewley tunnels; the awesome Hatton Flight of 21 locks; Warwick Castle; Leamington Spa; and Birmingham’s Gas Street Basin.

6. Avon Ring (108 miles, 130 locks, 58 hours): Starting from Drifters’ bases at Napton, Autherley, Stoke Prior, Tardebigge or Wootton Wawen, this World-famous journey includes 130 locks. Most people do this trip in a more leisurely 10 days or two weeks, but it is possible to do it in a week. The Avon Ring navigates sections of the Stratford Canal, River Avon, River Severn and Worcester & Birmingham Canal. Highlights include: Stratford-Upon-Avon and its famous Swan Theatre; the Lapworth flight of 25 locks; the Wilmcote flight of 11 locks; the River Avon and its panoramic views across Wawickshire and the Cotswolds; historic Evesham and Tewskesbury; Worcester and its magnificent cathedral; Telford’s lofty Mythe Bridge; the tidal River Severn double river-lock at Diglis, the 30 lock Tardebigge Flight, the longest in the country; and the 2495 metre long Wast Hills Tunnel.

7. The Four Counties Ring (110 miles, 94 locks, 55 hours): Starting from our bases at Autherley, Acton Bridge, Coventry, Brewood, Great Haywood, Peak District or Gailey, this ring is achievable on a week-long holiday. The four counties are Staffordshire, the West Midlands, Cheshire and Shropshire and the route includes the Trent & Mersey, Staffs & Worcs and Shropshire Union canals. Predominantly rural, this ring’s highlights include: the World famous 2670-metre long Harecastle Tunnel; extravagant cuttings and embankments on the Shropshire Union; Market Drayton home of gingerbread; Wedgewood Pottery Visitor Centre; views of the rolling Cheshire Plains; the Roman town of Middlewich; the Ski Centre, China Gardens and Waterworld at Etruria; Shugborough Hall; Churches Mansion; the waters at Tixall Wide on the Staffs & Worcs; the narrow canal at Autherley Junction; and the flight of 15 locks at Audlem.

9. The Leicester Ring (157 miles, 102 locks, 75 hours): from Drifters’ bases at Stoke Golding, Rugby, Napton, Coventry, Braunston, Stretton, Market Harborough or Gayton, this epic route is achievable in two weeks. The route cruises a mixture of non-tidal, broad and narrow canals, including the Birmingham & Fazeley, Coventry, Oxford, Trent & Mersey canals, the Grand Union Leicester Line and the rivers Soar and Trent. Highlights include: the Saddlington Tunnel, a roost for bats on the Leicester Line; the Foxton Staircase of Locks and Museum dedicated to the incredible Foxton Inclined Plane Boat Lift which once carried boats up and down the hill in two giant bath tubs; the pretty canal village of Stoke Bruerne with its Canal Museum; Blisworth Tunnel; Braunston canal village; Hillmorton Locks; 11 locks at Atherstone; Coventry and views of its magnificent cathedral; and the 18th century canal village of Shardlow.