You are here: Home / boating holidays / Visit a Waterway Museum 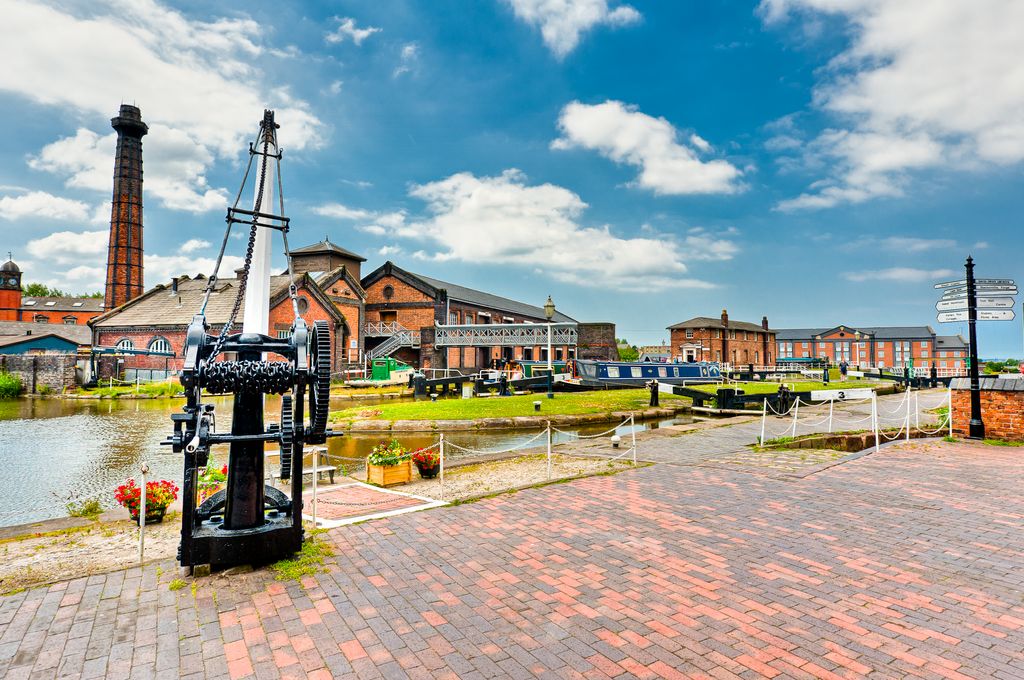 To find out more about the fascinating history of our canal network, including the people who built and worked on it, why not visit a waterway museum on your canal boat holiday.

We’ve listed our favourite museums and visitor attractions, together with the nearest Drifters canal boat hire base.

History comes to life at the National Waterways Museum on the banks of the Mersey and Manchester Ship Canal in Cheshire, with extensive in-door displays, boat trips and historic buildings.

Designed by Thomas Telford under the direction of William Jessop, the docks at Ellesmere Port were still in use as late as the 1950’s.  Visitors to the museum can walk round its locks, docks and warehouses and visit its forge, stables and workers cottages.

The Museum is also home to the waterways archive and a unique fleet of historic working boats, cared for by the Heritage Boatyard team.  It offers an exciting programme of events, featuring everything from beer festivals to historic boat rallies.

Drifters’ nearest canal boat hire base is a ten-hour cruise away at Bunbury on the Shropshire Union Canal in Cheshire.  Prices start at £465 for a short break and £660 for a week.

Housed in a former ice warehouse on the Regent’s Canal in King’s Cross, The London Canal Museum tells the story of London’s canals, the cargoes carried, the people who lived and worked on the waterways and the horses that pulled their boats.

Visitors can peer down into the huge Victorian ice well used to store ice imported from Norway by ship and canal boat.  The warehouse was built in 1862-3 for Carlo Gatti, the famous ice cream maker so the Museum also features the history of the ice trade and ice cream.

Drifters’ nearest base on the Grand Union Canal in West London is a six-hour cruise away.  2013 prices start at £525 for a short break and £808 for a week.

The Canal Museum at Stoke Bruerne

Set in the beautiful village of Stoke Bruerne alongside the Grand Union Canal in Northamptonshire, The Canal Museum is a treasure trove of stories, displays, films and collections about our waterways.

Housed on two floors of a historic corn mill, the museum provides an excellent overview of the history of Britain’s canals.

Visitors can find out about the great engineers and navvies who created the canals, and the boat families, ‘leggers’ and lock keepers who lived and worked on them.

Examples of canal crafts, traditional clothing and specialist tools are on display, as well as models of working boats, Claverton Pumping Station and the Foxton Inclinded Plane boat lift.

Drifters’ nearest base is just an hour away on the Grand Union Canal at Gayton.  Prices start at £455 for a short break and £695 for a week.

The Waterways Museum at Gloucester is housed in a Grade II listed warehouse at the heart of the City’s fine Victorian docks, beside the Gloucester & Sharpness Canal and River Severn.

Through a series of galleries, the Museum sheds light on all aspects of our waterways.  For example, ‘Trade and The Docks’ captures the atmosphere of a working warehouse and shows the role played by docks and canals in the British Empire and Industrial Revolution.

While ‘The Story of Canals’ gives a fascinating overview of the people who created, worked and lived on the canals.

Drifters’ nearest base is at Worcester, a 10-hour cruise along the River Severn.  Prices start at £355 for a short break and £545 for a week.

Tunnelling three and a quarter miles beneath the Pennines, Standedge is the longest, deepest and highest canal tunnel in Britain.

It took the navvies 16 years to build, cutting through solid rock to connect Marsden in West Yorkshire with Diggle in Greater Manchester in 1811.

The story of this incredible feat of 18 and 19th century engineering is told at the Standedge Tunnel visitor centre at Marsden, where a trip boat also operates.

Narrowboat holiday-makers can book a passage through the tunnel with a Canal & River Trust pilot, giving a vivid personal commentary.

Drifters’ nearest canal boat hire base is 20 miles away at Sowerby Bridge.  Prices for a week’s break start at £515 (including fuel).

No description can adequately convey the sheer scale of this engineering feat, designed by Edwin Clark.

Also known as ‘The Cathedral of the Canals’ this extraordinary structure raises boats 15 metres (50ft) from the River Weaver to the Trent & Mersey Canal.  It consists of two huge counterbalanced water tanks, each large enough to take a barge or pair of narrowboats, held within a giant three-storey-high iron spider-like construction.

The Operations Centre at Anderton tells the story of the lift, with interactive displays.  Narrowboat hirers can book a passage through in advance through their hire company.

Built as part of the Millennium Link project to restore the canals linking the east and west coasts of Scotland, The Falkirk Wheel is the world’s first and only rotating boat lift.

Standing at a height of 35 metres, it moves boats between the Union Canal and Forth & Clyde Canal, replacing a flight of 11 locks which was dismantled in 1933.

It can carry 600 tonnes, including eight or more boats and uses just 1.5KWh of energy to turn – the same amount as it would take to boil eight household kettles.

The Falkirk Wheel visitor centre vividly tells the story of the canals and the Wheel.

Drifters has two canal boat hire bases at the Falkirk Wheel, with 2013 prices starting at £446 for a short break and £686 for a week’s hire.

Completed in 1774, this spectacular staircase of locks on the Leeds & Liverpool Canal 17 miles from Leeds, raises (or lowers) boats 18 metres (60ft) in five cavernous chambers.

The locks open directly from one to another, with the top gate of one forming the bottom gate of the next.

The Five Rise Café has a cabinet of curiosities which explains why the canal and locks were built.  There’s also a Family Trail to follow and a Smartphone App to download with videos and real stories about the locks.

Drifters’ nearest canal boat hire base is 30 miles away at Foulridge.  2013 prices for a week’s break start at £515 (including fuel).

The Foxton Inclined Plane was short-lived but fascinating example of Victorian ingenuity.

The Foxton staircase of locks on the Leicester Line of the Grand Union Canal was built in 1810.  A trip through the locks takes about 45 minutes, rising 75ft and uses 25,000 gallons of water.  Only narrowboats can travel through.

Towards the end of the 19th century, with the coming of the railways, canal carrying companies wanted to use bigger boats to take coal from the North to the London factories.  Grand Junction Canal Company engineer Gordon Cale Thomas put forward the idea of a unique boat lift which consisted of two huge tanks of water linked by wire rope.

A steam driven winch at the top wound the rope on to one side of its drum and simultaneously let it off the other, raising and lowering the tanks.  Two narrowboats or one barge could fit in each tank.

The lift, which opened in 1900, reduced the journey time up or down the hill to 12 minutes and used considerably less water.

Sadly, with the reduction in traffic on the canals, the lift was mothballed in 1911 to save money and in 1928 the machinery was sold for scrap.

ENJOY AN ADVENTURE AFLOAT AT EASTER

RURAL SPRING BREAKS ON THE CANALS Scroll to top