From romantic waterside encounters to gritty urban scenes, Britain’s canals and rivers have featured in many movies and television shows over the years.

And recently, a number of television series have put canal boat holidays at very the centre of the action, with popular series like Tim and Pru’s ‘Great Canal Journeys’ and ‘Celebrity Carry on Barging’.

To celebrate canals on screen, we’ve put together our Top 9 waterway starring moments over the last 18 months:

1. Paddington 2 – Little Venice, where the Regents Canal meets the Grand Union, was the backdrop to a chaotic chase scene, with Paddington riding on the back of a dog in Browning’s Pool

5. Celebrity Carry on Barging – starring Lorraine Chase, Nigel Havers, Simon Callow and Debbie McGee, this four-part series on Channel 5 saw the celebrities pairing up to cruise and dine together

6. A Very English Scandal – this BBC drama, starring Hugh Grant as the MP Jeremy Thorpe and Ben Whishaw as his lover Norman Scott, includes a scene filmed at Hertford Lock on the River Lee

7. Swimming with Men – this film (to be released on 6 July) about an all-male group of synchronised swimmers, stars Rob Bryden and Charlotte Riley, and includes scenes filmed on a canal boat near the Queen Elizabeth Olympic Park

9. Great Canal Journeys – Channel 4’s popular series featuring Timothy West and Prunella Scales travelling by canal boat along waterways both in the UK and overseas, has so far run for eight series, with the very latest episode visiting the Monmouthshire & Brecon Canal in Wales 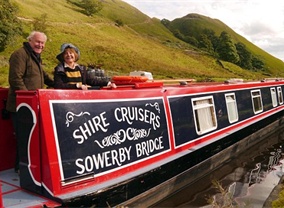