You are here: Home / News / Top 10 canalside pubs to visit on a narrowboat holiday 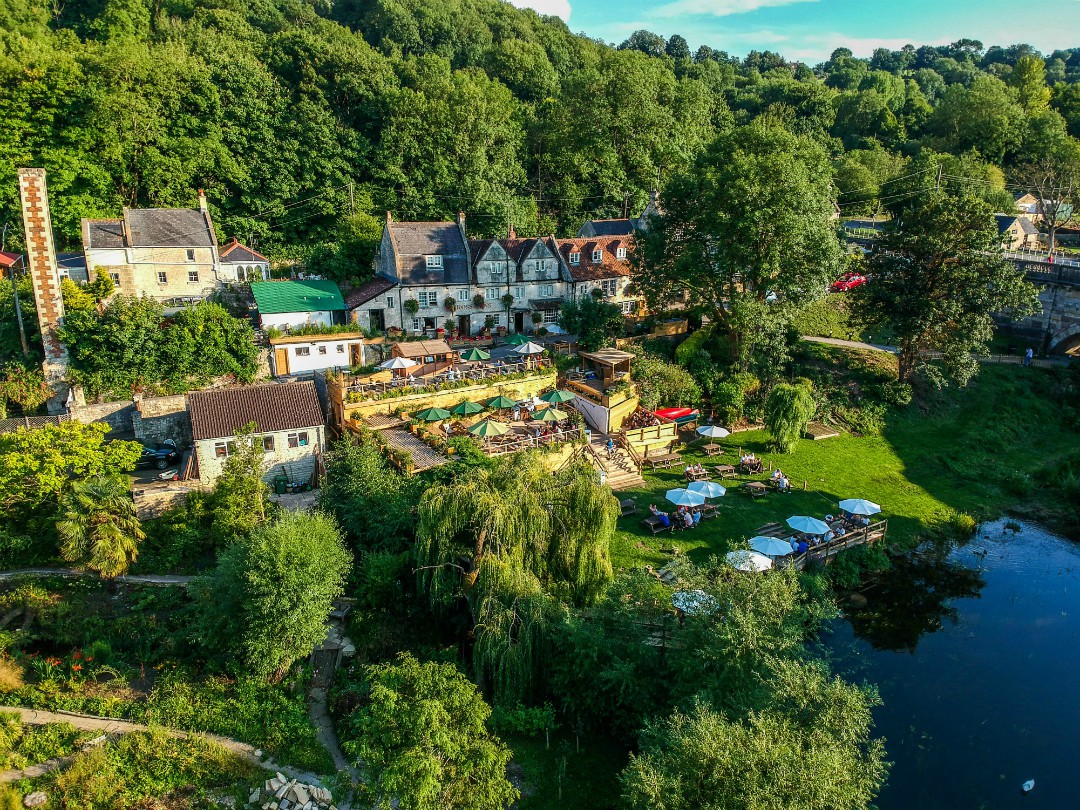 Canalside pubs are popular destinations for canal boat holiday-makers, and there are hundreds to choose from.

They often have names like The Lock Inn, The Navigation Inn, The Narrowboat, The Tunnel and The Bridge.  And many date back to the days when canals were the transport infrastructure of the industrial revolution.  Canalside inns provided refreshment for working boat families and their horses, as well as professional leggers who propelled boats through tunnels.

To celebrate the return to indoor drinking and eating in pubs from next Monday, we’ve listed our Top 10 waterside pubs for 2021:

1. The Weighbridge at Alvechurch Marina in Worcestershire

This historic country pub next to the Worcester & Birmingham Canal has a rustic vibe with quirky décor.  It’s renowned for its two-in-one pie, with beef (or other filling options) on one side and cauliflower cheese on the other, topped with pastry. Our nearest canal boat hire base is next door at Alvechurch Marina.

2. The Holly Bush Inn at Denford in Staffordshire

Housed in an old flour mill on the Caldon Canal, the Holly Bush Inn is surrounded by Staffordshire Moorlands.  The pub offers award winning ales and delicious homemade food.  It has a large canalside beer garden and is both family and dog friendly.  From our narrowboat hire base at Stoke on Trent, it takes around seven hours to reach The Holly Bush.

3. The Stubbing Wharf at Hebden Bridge in West Yorkshire

The Stubbing Wharf on the Rochdale Canal offers home cooked food, including Sunday lunch roasts. It has a choice of real ales and a canalside beer garden. The pub was built soon after the completion of the Rochdale Canal in 1789.  It served travellers on both the canal and the turnpike road.  Its curious name derives from the ancient settlement of Stubbing, an Anglo-Saxon word for clearing where the tree stumps have been left.  From Drifters canal boat hire base at Sowerby Bridge, it takes around five-and-a-half hours to reach Hebden Bridge.

4. The Swan at Fradley Junction in Derbyshire

At the junction of the Trent & Mersey and Coventry canals at Alrewas, the historic Swan pub is known locally as the ‘Mucky Duck’.  The pub offers traditional home cooked meals and a choice of cask ales.  The Swan’s bar area is decorated with Roses & Castles narrowboat art. Drifters’ base at Great Haywood is a six-hour cruise away, and Kings Orchard is just one-and-a-half hours away.

5. The Blue Lias at Stockton in Warwickshire

Located on the Grand Union Canal, this historic rural pub was named after the limestone and clay that is quarried locally.  The clay is derived from material laid down in the early Jurassic seas, when dinosaurs roamed the earth.  The Blue Lias is around two-and-a-half hours by boat from our Stockton base.

6. The Plume of Feathers at Barlaston in Staffordshire

This popular pub on the Trent & Mersey Canal is part owned by the actor Neil Morrissey.  Visitors can sample some of Neil’s own beers and ales, and choose from a menu of homemade dishes made from fresh local ingredients.  It takes just over three hours to reach Barlastan from Drifters’ base at Stoke on Trent, and its seven cruising hours from Great Haywood.

7. The Cross Guns at Avoncliff in Wiltshire

Located alongside the Kennet & Avon Canal, this 17th century inn has idyllic riverside pub gardens.  It has panoramic views of the foothills of the Cotswolds and the beautiful Avoncliff Aqueduct.  The Cross Guns serves a selection of British pub favourite food, local ales, cider and craft beer.  It’s just an hour from ours base at Monkton Combe, and an hour and a half from Hilperton.

8. The Olde Barbridge Inn at Nantwich in Cheshire

This historic pub on the Shropshire Union Canal near Nantwich sells a selection of local ales brewed at its own local brewery. And serves classic British food made with local produce.  The Olde Barbridge Inn is an hour’s cruise from our narrowboat hire base at Bunbury.

9. The Narrow Boat at Whittington in Shropshire

With its tranquil canalside location and beer garden, the family owned Narrow Boat Inn on the Llangollen Canal offers hearty pub food and real ale.  The Narrow Boat is just over an hour by boat from Drifters base at Blackwater Meadow, and three hours from Chirk.

10. The Fleur De Lys at Lowsonford in Warwickshire

This pretty 17th century country pub on the banks of the Stratford Canal has a lovely beer garden.  The Fleur De Lys has been famous for its pies since the 1950’s, all served with seasonal vegetables, chunky chips and gravy.  Drifters nearest narrowboat hire base is just three cruising hours away at Wootton Wawen.

Visit Coventry on a canal boat holiday Scroll to top