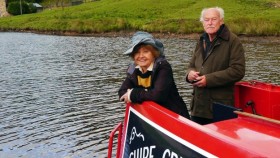 Approaching their 80’s and determined to keep canal adventuring for as long as they can, ‘Grand Canal Journeys’, which starts next Monday, follows these narrow-boating heroes as they celebrate their golden anniversary with four very special journeys across the canal network of Britain and France.

In the first of the series (10 March), Tim and Pru revisit the picturesque Kennet & Avon Canal, which they helped to save from closure 24 years ago.

Next (17 March), they undertake the strenuous climb up the industrial Pennines on the Rochdale and Huddersfield Narrow canals, and brave the longest underground canal in Britain.

In episode three (24 March), they marvel at the dramatic Welsh scenery and staggering engineering of the Llangollen Canal and in the final installment (31 March), they hop across the channel to see France’s famous Canal du Nivernais in Burgundy.

Each journey reveals the rich and diverse history and culture of canal life, explores the beautiful scenery of Britain’s landscapes and wildlife, and gives Tim and Pru the chance to recreate some of their most treasured family moments with their sons, Sam and Joe.

Hire a canal boat for Father’s Day Scroll to top