You are here: Home / Uncategorized / Take a Canal Boat Holiday this Easter 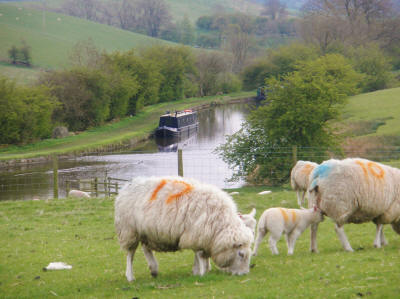 Easter is a great time of year to take to the water and watch the countryside bursting back to life – with newborn lambs, spring flowers and hedgerows buzzing with busy birds.

Many canalside attractions, like Cadbury’s World near Birmingham and the Anderton Boat Lift in Cheshire, will be hosting special Easter events, so why not pack-up and ship-out for some Easter holiday fun afloat.

1. Boat to Birmingham…Boaters can travel lock-free to Birmingham in just five hours from our canal boat hire base at Tardebigge on the Worcester & Birmingham Canal, stopping off along the way to sample the delights of Cadbury World. With more canals than Venice, there’s no better way to travel into Birmingham City Centre where over-night moorings are available close to Brindley Place. There’s plenty for families in Britain’s second city, including a visit to the Sea Life Centre at Brindley Place or take in a show at the famous Hippodrome. Short breaks on a boat for four from Tardebigge over Easter start at £595, weekly breaks from £855.

2. Visit Georgian Bath…on a short break from our base at Bradford on Avon in Wiltshire, boaters can travel along the beautiful Kennet & Avon Canal and reach the centre of the World Heritage City of Bath in seven hours. As well as stunning architecture, great shopping and restaurants, Bath has many family attractions, including the Roman Baths and the Theatre Royal. Easter short breaks on a boat for four from Bradford on Avon start at £620, weekly cruises from £800.

3. Take a lift up ‘the Cathedral of the Canals’…from our base at Anderton at the junction of the River Weaver and Trent & Mersey Canal, a journey through the incredible Anderton Boat Lift is a must. Perched on the banks of the River Weaver like some giant three-storey-high spider, the lift provides a 50-foot vertical link between the two waterways. From Anderton, a short break could take you to the lovely medieval town of Nantwich or travel to Chester and back on a week’s holiday. Prices from Anderton at Easter start at £769 for a short break on a boat for four, £1179 for a week.

4. Travel across ‘the Stream in the Sky’…standing over 38 metres high and 305 metres long, the awesome Pontcysyllte Aqueduct on the Llangollen Canal in North Wales, is an incredible feat of engineering. Though canal boats travel at just four miles an hour, with not even a hand rail on the south side of the aqueduct to obscure panoramic views of the stunning Dee Valley below, boaters literally feels like they are floating above the earth! From our base at Trevor, just 20-minutes by boat from the Aqueduct, hirers can travel along the Llangollen Canal, experiencing one of the UK’s most beautiful stretches of waterway, and meeting the Shropshire mini lakes and historic Chirk Castle along the way. Short breaks on a boat for four from Trevor at Easter start from £595, weekly cruises from £855.

5. Visit the Hepworth Museum in Wakefield…Travelling gently along the leafy Calder & Hebble Navigation from our base at Sowerby Bridge in West Yorkshire, it takes 12 hours to reach Wakefield, with moorings right outside The Hepworth Wakefield. This inspiring new gallery explores the work of major contemporary artists in one of the UK’s largest purpose-built galleries outside London. Easter 2014 hire prices start at £695 for a short break (three or four nights) on boat for four, weekly hire from £1050.

6. Explore the Brecon Beacons afloat… the beautiful Monmouth & Brecon Canal offers 35 miles of quiet countryside to explore with incredible mountain views. From our base at Goytre Wharf near Abergavenny, boaters can journey through the Brecon Beacons National Park from Brecon to Cwmbran, visiting the Georgian town of Crickhowell with its 13th century castle and picturesque Talybont-on-Usk, with walking access to Blaen y Glyn waterfalls. Easter 2014 short breaks (three or four nights) on a boat for four people from Goytre start at £769, weekly hire from £1179.

7. Discover ‘the City of Dreaming Spires’ afloat…our Oxford base at Eynsham on the River Thames is a three-hour cruise from Oxford City Centre, where boaters can find moorings within walking distance of city centre attractions. Just some of the of the exciting things to do in Oxford include: climbing the 14th century Carfax Tower to take in a view of Oxford’s ‘dreaming spires’; seeing the witch in the bottle and shrunken heads at the Pitt Rivers Museum; discovering the real Harry Potter Hogwarts Hall at Christ Church College; and stocking-up on goodies in the Covered Market. Easter prices from Oxford start at £595 for a short break (three or four nights) and £855 for a week on a boat for four.

8. Visit the Peak District and Water World…our base at Stoke-on-Trent on the Trent & Mersey Canal is on the National Garden Festival Site, the home of Water World, a dry ski-slope, multi-screen cinema, ten pin bowling and large shopping centre. This canal boat hire base offers a huge variety of routes for both beginners and experienced boaters. On a short break, travel through the stunning Churnet Valley along the Caldon Canal and to the Churnet Valley railway and the Black Lion Pub at Consall Forge. On a week’s break, intrepid boaters can navigate the 111-mile long Four Counties Ring, stopping off along the way at the Wedgewood Factory, Lord Lichfield’s historic working estate at Shugborough Hall and Churche’s Mansion in Nantwich. Short breaks on a boat for four from Stoke on Trent over Easter start at £621, weekly hire from £956.

9. Travel through rural Northamptonshire…our base at Gayton on the Grand Union Canal in Northamptonshire is one of the most popular in the country. Not only is it centrally located and easy to get to (it’s just minutes away from junction 15a of the M1), but it also offers a great variety of cruising routes for boaters, whether novices or experienced navigators. A short break (four nights) could take boaters south to Fenny Stratford and back, cruising through delightful countryside and the picturesque village of Stoke Bruerne, with its friendly waterside pubs and fascinating Canal Museum. On a week’s cruise, head to the historic town of Market Harborough via the Foxton staircase of locks, with wonderful views of the Leicestershire countryside and the chance to find out about the intriguing Foxton Inclined Plane boat lift which once operated there. Short breaks on a boat for four from Gayton over Easter start at £769, weekly breaks from £1179.

10. Visit Edinburgh Castle & Mary King’s Close…from our base at the incredible Falkirk Wheel in Scotland, Edinburgh is an 11-hour cruise away along the Union Canal.  On the way, boaters pass through the pretty villages of Ratho and Linlithgow.  Once there, visitor moorings can be found at Edinburgh Quay, providing easy access to the sights of Edinburgh, including the magnificent castle and fascinating Mary King’s Close, frozen in time beneath the Royal Mile.  On a week’s holiday, boaters could also travel to Glasgow, home of this year’s Commonwealth Games.  Short breaks from Falkirk at Easter start at £656, weekly hire from £1010.

Take to the canals for half term