You are here: Home / boating / Our Honeymoon Afloat 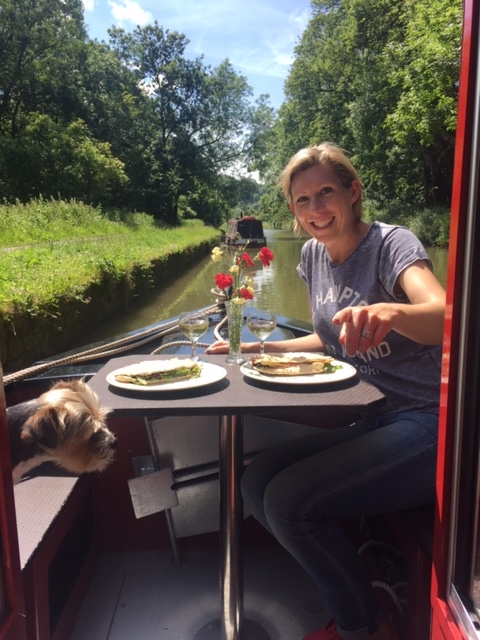 Miranda Pennington and Helena Snowden recently Honeymooned on the Kennet & Avon Canal, travelling from Drifters’ base at Hilperton, near Trowbridge in Wiltshire, to Bath and back. Here’s their account:

We’ve just returned from the most beautiful and relaxing honeymoon on the Kennet & Avon canal. What an incredible experience for a novice couple – I’d never set foot on a canal boat before but my partner Miranda had done a couple of locks over the years!

Based on that knowledge, we actually picked a four berth for the two of us and our small dog, and it turned out to be the right decision. A full double bed made up the whole time, with a separate lounge and dining area for dinner and cards in the evening – not to mention our little table outside on the bow where we could watch the sun go down. And what a brilliant time of year to go – we saw new cygnets, herons, ducklings, not to mention all of the stunning scenery gently rolling by.

We left London for Drifters’ base canal boat holiday hire base at Hilperton on the Monday but, owing to all of the wedding shenanigans over the previous few days, we were a little late starting our car journey and thought we might not make the 5pm check-in time.

Miranda called Hilperton Marina, though, and they were absolutely lovely – not only accommodating our late arrival but also moving our boat – ‘Sedge Wren’ – from under the wharf into the evening sunlight so we could relax for the night there, rather than setting off on our travels at peak mooring time.

We had our induction with Nick the following morning, having stocked up on loads of food (and bubbles of course!) from the local supermarket. Then, with a strange combination of apprehensiveness and excitement, we set off. Our dog Twiggy wasn’t quite sure what to make of it at first but soon took up position on the seat next to me while I was steering. She stayed there for most of the week, lounging in the sun while we did all the hard work. Only jumping off occasionally to run up to dogs on the towpath.

The boat’s fairly straightforward once you get your head around which way to move the rudder. Any kind of boating or rowing experience helps a great deal with it all –not least, knowing the rules of the river. It takes a little while to relax into it but everyone is very patient and polite. As one of the ladies on the first day said to us, “If anyone tries to rush you, tell them that if they’re in a hurry the M3 is just over there!” And she was right – not that you could see it or hear it once you’re on the canal. It’s a totally different world.

After our first hour, we arrived at Bradford on Avon lock, which is a double lock and quite busy. Thankfully, though, the Canal Trust volunteers were there to help and we went through alongside a workmen’s boat – they were lovely and gave us some tips as we set off on our way again.

We stopped for lunch after our first aqueduct (Avoncliff), which was very exciting. Then we continued to the second aqueduct (Dundas) and started to look for somewhere to moor up overnight. Not long after, we found a very quiet spot with an easy bank to pull up to and with permanent mooring fixings, even though we had been gearing ourselves up to use the pegs!

We had a really chilled evening, cooking in the well-equipped kitchen and dancing around with some red wine in the moonlight. We slept really well, a little sun-kissed by the hot June sun, which had bounced continuously off the river the whole of the day. And I totally forgot to mention the two swing bridges we’d been through – physically exhausting but really satisfying, with one of you unlocking and swinging the bridge while the other has to park up, go through and park up again single-handed. My competitive side had loved it!

We woke up fairly early and had breakfast before taking Twiggy for a quick walk by the Claverton pumping station and weir. A really beautiful spot and well worth a visit.

Then we set off for Bath, where we intended to spend the upcoming night. We’d really started to get the hang of things by now but we decided to turn before committing to the last four locks in Bath – we’ll save that for next time when we have one or two other people with us to help.

The turning point was really easy to find and a lovely old man popped his head out of a building to throw us some helpful hints. We did alright overall! Top tip: remember you can’t steer in reverse!

We found a lovely place to moor again, this time with the lovely views of Bath town that we’d just passed. What a privilege. We strolled down to The George at Bathampton for some afternoon drinks, as we’d been recommended to visit. But we discovered that they didn’t take dogs so carried on down to the Bathampton Mill pub – and, wow, what a location. If you fancy walking 10 minutes more, it’s well worth the trip. Great food great staff, great view. A really nice night again.

We’d always planned a big day on our last day because someone we met had said the other direction from Hilperton towards Semington was also really beautiful. We decided to give it a whirl and, in six hours, managed to go back through the two aqueducts, two swing bridges and Bradford on Avon lock, and made it all the way to Semington, where we were extremely pleased to find one spare mooring before the next turning point and lock.

We settled in and then went to check out the Somerset Arms pub, which was an endearing pub close by. The food looked good there, although we didn’t stop to eat as we were finding cooking on the boat very enjoyable.

So, on our last day, we were up pretty early so we could tackle another turn and take the ‘Sedge Wren’ back to base in time for the handover. Cruising at that time of the morning on a relatively quiet section of the canal was so beautiful and peaceful – the perfect end to an excellent holiday.

We can’t wait to come again and with a bigger crew so we can get through more locks! Maybe not the Caen Hill locks up at Devizes though! 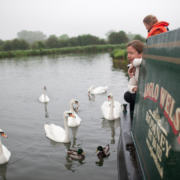 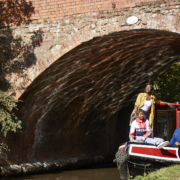 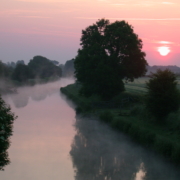 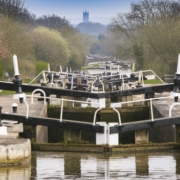 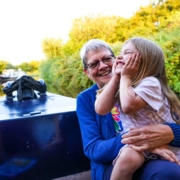 8 ways to reduce plastic waste on your narrowboat holiday