You are here: Home / Canal holidays in Southern England

Canal holidays in Southern England  give you access to waterways that include some of our finest rivers – the Royal Thames, the quiet River Avon and the majestic River Severn. These join some very varied canals: the Oxford Canal is almost totally rural, whereas the Grand Union Canal offers a mixture of rural and urban cruising – each exciting in its own way. 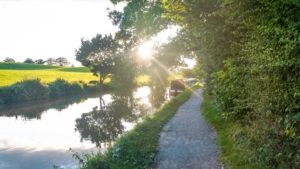 The River Thames, although not maybe so well-known as a holiday location, makes for a totally relaxing cruise, as the locks are worked for you by lock keepers and you can concentrate on the historic atmosphere of the landscape it passes through as you glide along. The River Avon forms part of the Avon Ring, and again passes through some wonderful countryside between historic towns.

The Grand Ring which takes two weeks cruising, is formed by the River Thames and the Oxford and Grand Union canals.

Whether you want a short break, week or longer the Kennet & Avon Canal provides some varied cruising. The World Heritage City of Bath, the picturesque market town of Bradford on Avon, Bristol’s floating harbour, Dundas Aqueduct, or the magnificent Caen Hill locks are just a few of the treats this canal has in store.  All this and more await you on the canals of Southern England.